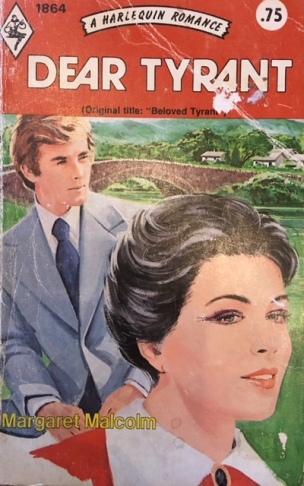 First published as Beloved Tyrant in 1953.

Thirty-five Ithaca College undergraduates are taking my first-year seminar Reading Popular Romance. In the footsteps of Carol Thurston and Janet Radway, we leaf through hundreds of roughed-up, red-edged books and mine the texts for what they are: artifacts of popular culture. One collective expression of an unarguably female imagination. The very act of reading is everyday citizen science. We ask ourselves, whatever will these women say next?

So what have we learned from Dear Tyrant? For one thing, something about a woman’s professional life in the 1950s. Goodreads reports that Margaret Malcolm wrote over 100 romance novels at Mills & Boon from 1940 to 1981. By the time Beloved Tyrant was published in 1953, she’d already written ten.

You’d think after reading hundreds of romance novels that by now the pleasure would be, you know, expected. But it was an unexpected pleasure to see in the pages of Margaret Malcolm‘s Dear Tyrant (1975) reference to Jane Eyre. It’s not unusual for authors of these old category romances to follow Brontë’s lead. Thousands of paperback romances were written before women could be issued credit cards in their own names, while marital rape was legal (legal until 1993 in all 50 states, my friends), when access to the Pill was decades away. One of the few jobs available to Harlequin’s heroines – or for women in general for that matter – was as a caretaker for homebound invalids or children. It shouldn’t have moved me overmuch when the character sees her own reflection in governess Jane Eyre. Still, I was tickled.

Because even in her eleventh book, Margaret Malcolm was having fun. Not only does her heroine laugh at the image of herself as Jane Eyre, but she also attends a masquerade ball, has to leave by the stroke of midnight, and loses a shoe in the throes of her speedy departure. A nod to Jane Eyre, and a wink at Cinderella.

Eleven books in, with eighty-nine to go? That’s about time a career romance writer taps her nose and says I got this, too.