In honor of all the women who in 2017 fundamentally changed the conversation around sexual harassment, in honor of all the women who for a hundred years prior tried and failed, and in honor of those of us to come who will still speak truth to power, even in the face of new ASAP legislation (I speculate here) that will make accusing a white man of anything at all a criminal offense…I give you The Everywhere Man.

Because, even if she claims she doesn’t, every woman wants a stalker.

Set in Australia, Alix is an architectural draftswoman with a talent for design and training German Shorthaired Pointers. Alix lost both her parents to a bushfire two years before, a sad fact that serves to motivate our heroine, at the awfully familiar sound of an Australian bushfire, out of the bush onto a busy highway at warp speed. She swerves into a ditch to avoid the hero. In the midst of an angry man rescue, she faints (ffs).

“Obnoxious, arrogant, conceited” Quinn Tennant pulls her out of the ditch. After Alix fails to show proper gratitude, Quinn asks, “Is it part of some Women’s Lib programme to be ungrateful, stroppy, and generally disagreeable?” (p. 17). Expressly claiming payment, he kisses her with “no crude savagery. Only a vast knowing” (p. 18, italics belong to the author). She tries and fails to claw-slap him (“Naughty, naughty” he chides), which is followed by laughter: “Why not relax? You’ve only one more kiss to finish the debt” (p. 19).

The professional rapes described in the story are metaphoric in scope. Victoria Golden, author of Always the Boss (1981) and Age of Consent (1985), among other 80s category romances, is presumably familiar with the issues of sexual predation in and out of the workplace.

Alix’s former fiancee and co-worker, a threadbare stereotype, steals her designs. New hero Quinn Tennant is not only her judge in dog shows, the landlord of her rented cottage, but also her boss. I won’t go into the details of the now-dated professional set-up for the central love scene. It includes a hotel suite, a drink in the boss’ face, a naked roll across the vast bed, an “athletic” dismount from the mattress, followed by a “sprint for the doorway”  (p. 114). Alix’s virtue remains intact because heroines can be out-and-out shrews when confronted with deflowering.

Fast forward through more dog shows to the happily-ever-after: The two are engaged to be married, and Quinn reveals he’s rescued Alix’ stolen designs. She promptly rips the short stack of drawings in half and quarters, saying “these are from the past; they don’t matter now” (p. 189).

What woman would rip up her original drawings? Who would expect her to?

It may mean nothing, but author Victoria Golden is a man, and the a.k.a. was born in response to the publisher’s claim that “no man” could write Harlequin category romance: “Gordon is widely believed to be the first man to seriously meet the challenge.”

I ask myself: is it one thing when readers consume toxic romance narratives imagined by other women, but another thing entirely when they’re crafted by a man (pretending to be a woman)?

My students tell me that it seems sometimes that I love these books, and sometimes that I hate them. Rarely in life am I this conflicted. True, someone can offer me one drink or another, and, faced with a hard choice, I’ll end up with both.

So I’ll end up with both here…

I hate this book. 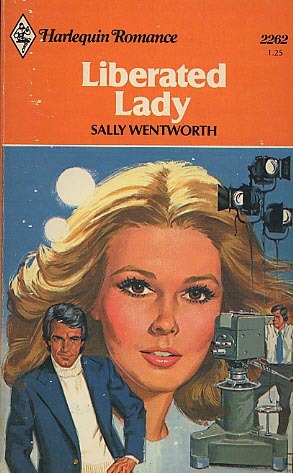 This is science folks. And a romance novel from 1979 titled Liberated Lady…? It could be the motherlode. The size of the TV studio camera on the cover screams Lacanian gaze, and Sally Wentworth is celebrated for 101 books on Goodreads. It’s the perfect storm. Talk to me, Goose.

Going in, here are my boy-crazy-yet-feminist (mark my epitaph) hopes for this love story:

I’m not optimistic. First sign of trouble is the inside cover, a total turn on for us rape fetishists who are titillated by forced seduction…

Don’t try to deny what’s between us.

Alex took a purposeful step toward her as Sara raised her hands in a futile attempt to ward him off. But he merely caught her wrists. Briefly she tried to struggle, but he said harshly, ‘It’s too late, the fight’s over.’ And he pulled her into his arms.

His mouth covered hers hungrily, claiming possession, allowing no resistance. Desperately, Sara tried to break free, but she couldn’t escape the passionate torment of his lips, searching, demanding a response.

She made a little sound, deep in her throat an the hand she’d raised to hit him instead sank slowly onto his shoulder and crept around his neck…

For the entirety of the book he’s mad she won’t admit he turns her on, but then when they can finally agree that she’s totally hot for him, he gives her a job, a part-time PR gig because “she knows something about computers.” Bam. HEA.

I need a hero.

But “sensitive, liberated men” aren’t in the cards for mainstream romantics. Take as another example, Silhouette Intimate Moments (1985) The Male Chauvinist by Alexandra Sellers. First off, I love camp shirts, but is he wearing jorts?

Language is important. Liberation, chauvinism. These things need words, and having them makes talking about the issues easier.

Andreas…seemed to epitomize the attitudes Kate had fought to escape–but his potent sensuality drew her into his arms. No “sensitive, liberated” man had ever had that effect on her.

See how we did that? We found the words to explain that male chauvinists are actually hotter.